New brawler: Janet
Rarity: Chromatic
It will be available in the 12th season of “Extreme Show”.

Basic Attack: Attacking enemies with her singing, she hits a high note, dealing damage in a cone-shaped area. The longer you hold the aim button, the farther and more focused the attack.
Super Attack: Janet’s Super uses a jetpack that lifts her into the air for a few seconds. While in the air, she attacks opponents on the ground.

Bonnie has two modes that are switched. 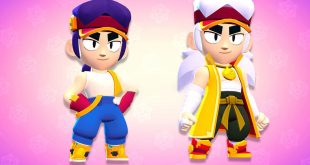